New play at the Threatre West 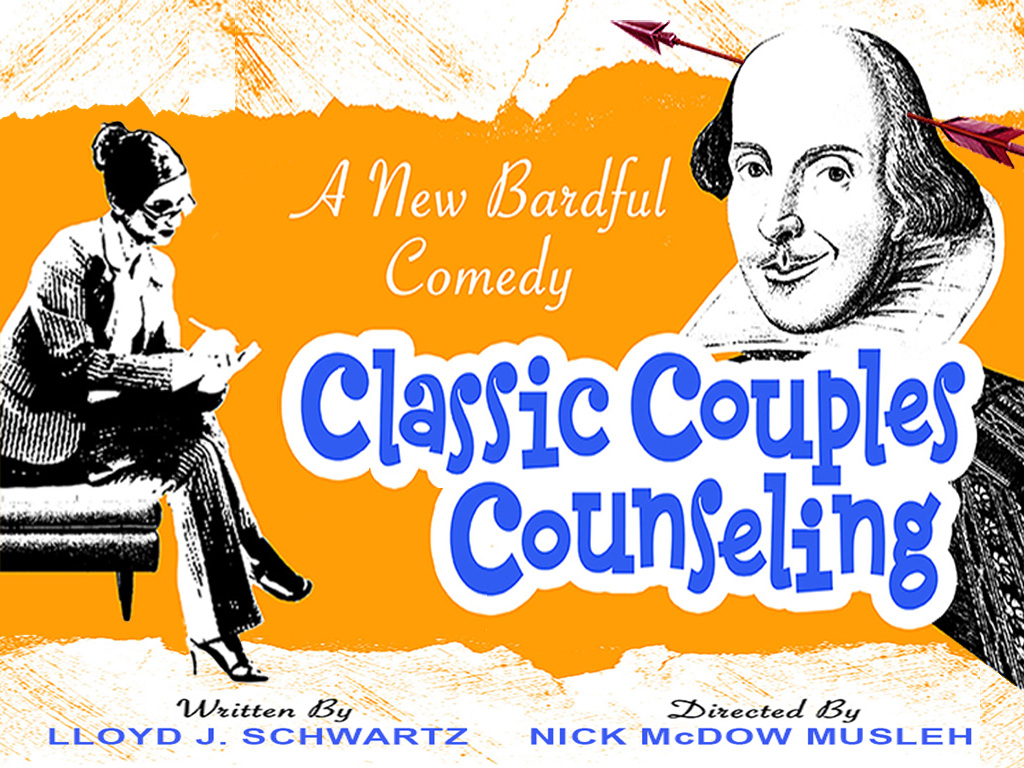 What if Shakespeare’s craziest characters—and there are lot of them – sought treatment from a therapist? Witness Romeo & Juliet, Hamlet & Ophelia, Othello & Desdemona, Petruchio & Kate, and the Macbeths go beyond therapy.

Dr. Patricia Cataldo is a psychotherapist with a special celebrity clientele: They’re all couples from Shakespeare! She analyzes Kate and Petruchio; Macbeth and Lady Macbeth; Romeo and Juliet; Othello and Desdemona; Hamlet and Ophelia. She also has them all come in for group sessions. They all trust her with their tender psyches. However, she has a few kinks of her own. Dr. Cataldo’s case load is occasionally reduced by attrition. If you know any of Shakespeare’s plays, you’ll know how that happens.

Classic Couples Counseling had its world premiere in North Hollywood in 2014. Here’s a sampling of the critical response to the play:

"Provides a prescription for fun and a cure via laughter."
-- J. Hugus, L.A. BeatA

"Witty…A quick pace, a lively spirit, and quite a bit of laughter."
-- M. Christensen, Tolucan Times

Nick McDow Musleh directs. Nick graduated from the UCLA School of Theatre Film and Television in 2006. Since then, he has performed at Theatre West and the Los Angeles Theatre Ensemble, as well as guest starring and recurring roles on CBS. He most recently directed a short film adaptation of Love's Labour's Lost and several productions for the Shakespeare Workshop at Theatre West, which he also moderates. TW credits include Our Man in Santiago by Mark Wilding, A Thorn in the Family Paw by Garry Kluger, Against the Wall by Charlie Mount, Moose on the Loose by Dina Morrone, A Short Stay at Carranor by Bill Blynn, and The Socialization of Ruthie Shapiro by Barbara Beery.

Lloyd J. Schwartz is the playwright. A man of all media, he wrote for the TV series Love, American Style; Alice; The Munsters Today; The A Team, The Love Boat, Baywatch and more. As an ABC network executive, he supervised production on Happy Days, Laverne and Shirley, What’s Happening and Three’s Company. With his father, TV legend Sherwood Schwartz, he co-created Harper Valley P.T.A.  Lloyd also produced numerous iterations of the Brady Bunch and Gilligan’s Island franchises (created by Sherwood) for feature films, television and stage. With his wife Barbara, Lloyd created the long-running Storybook Theatre at Theatre West. He has also had 34 produced plays.

Established in 1962, Theatre West is the oldest continually running professional theatre company in the city of Los Angeles. It is a membership collective of actors, playwrights, directors, and technicians. Theatre West’s alumni members include Ray Bradbury, Beau Bridges, Richard Dreyfuss, Sally Field, Betty Garrett, Martin Landau, Lee Meriwether, Jack Nicholson, Carroll O’Connor, Sherwood Schwartz, Joyce Van Patton, and Paul Winfield.   Theatre West has produced more than 300 plays and musicals.  Of these plays, nearly 70% are original works developed in its workshops and many have led to Broadway, regional tours, and feature films including A Bronx Tale by Chazz Palminteri and A Very Brady Musical by Lloyd Schwartz and Hope Juber.  Our season continues with Moose on the Loose by Dina Morrone in June 2022, and Storybook Theatre’s Goldilocks and the Three Bears is running Saturday matinees until June 2022. Theatre West is supported in part by The Ahmanson Foundation, California Arts Council, Los Angeles Department of Cultural Affairs, Kaplan-Loring Foundation, and Peter Glenville Foundation.

Whether you’re a fan of Shakespeare or just want to enjoy a hilarious comedy, you will enjoy “Classic Couples Counseling”…..because laughter, after all, is the best therapy.

Covid-19 safety protocols in effect on performance dates will be observed. As of this writing, that means that audience members must wear masks and be vaccinated (and able to show a vax card or digital record).