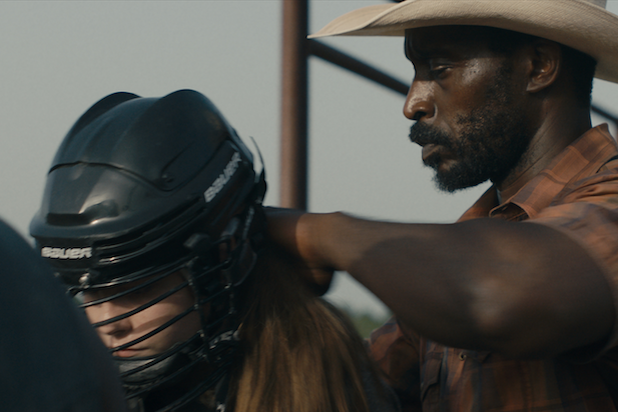 It’s probably unfair to compare Annie Silverstein’s “Bull” to Chloe Zhao’s “The Rider,” but in a way it’s hard not to. Both premiered at the Cannes Film Festival: “The Rider” at Directors’ Fortnight in 2017, “Bull” in Un Certain Regard on Wednesday. Both are the work of female directors looking into the world of rodeo, albeit in very different ways. And both are quiet, naturalistic films that illuminate hardscrabble lives that aren’t often put at the center of motion pictures.

It’d be a tall order for “Bull” to replicate the success of “The Rider,” which won the top prize in Directors’ Fortnight, was picked up by Sony Pictures Classics and won the Gotham Independent Film Award as the year’s best indie. But “Bull” is a tough but affecting film, a slice of life that should itself have some life now that it’s been unveiled in Cannes.

Or, rather, “Bull” is a slice of lives, a duet between two characters who make indelible impressions. Amber Havard plays Kris, a 14-year-old girl who sometimes seems intent on following her mother to jail; Rob Morgan is Abe, a former bull rider trying to hang on in the rodeo circuit despite an injury-wracked body.

Both are living hard, gloomy lives in the outskirts of Houston, Abe by himself and Kris with a grandmother who seems harsh and judgmental until you realize that she’s got a daughter in jail and would just as soon not have a granddaughter headed there, too.

But Kris doesn’t care: She breaks into Abe’s house one weekend (knowing he’s out at rodeos every weekend), invites her friends to raid his liquor cabinet, steal his pain pills and trash the joint – and when she’s caught, her only question is, “Can’t you just take me to juvie?”

But no, they can’t – instead, Kris has to clean up Abe’s place and do chores for him, a sentence that eventually breaks through her sullen exterior to almost turn into a friendship.

We know as soon as the movie begins to play out that Kris and Abe will be drawn together, but Silverstein seldom surrenders to sentiment – and in Havard and Morgan, she has a pair of lead actors who can avoid histrionics but quietly make us feel for these characters.

Both of them are living lives that seem full of dead ends: She puts up with casual sexual assault and becomes a drug dealer because she doesn’t have the strength to say no, while he responds to a doctor saying, “There are other ways to make money, Abe” with a simple, “Not for me.”

Both characters have taken the path of numbness, which for Kris means refusing to admit she feels anything and for Abe means medicating so he can’t feel all the ways in which his body has deserted him. Silverstein lets their interactions play out slowly; “Bull” is a patient movie, but one haunted by a sense of foreboding and doom.

And yes, bad things happen, but Kris finds a little bit of light in her (crazy) dream to one day ride bulls herself, and Abe finds somebody to care about when he’s not beating himself up. They need each other, and come to acknowledge as much.

And the fact that this never comes across as maudlin is tribute to a director who knows her way through dark places, and a pair of actors who can create a quiet storm.